The End of Refuge by Beth Martin 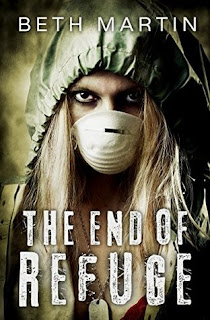 First Impression: I've never read a book about living in a bomb shelter that I recall, sounds scary.

Characters: Juliet is an innocent, literally sheltered young adult who comes of age amid the aftermath of conflict with North Korea. Her relationships and the supporting characters are realistic people with problems and charms like any of us.

World Building: There were moments of claustrophobia, which is not even something I struggle with in real life. While reading in bed I felt the walls close in and wondered what it might be like to never see the sun or feel its warmth on my face - to live in less than a square mile underground. What might that do to a person? The answer is many different things.

Writing Style: Martin's use of appropriate foreshadowing and answering questions as they unfold is comforting and like discussing a plot with a friend. I often wondered, "but what about this...?" only to be answered almost right away. The ending was satisfying yet unexpected, but I won't spoil the fun.

What I Enjoyed: The story really sparked for me around Avery and Juliet's relationship, as he shares his life story with her. From that point on I could barely put the book down as I wanted to know what became of these unlikely friends and the rest of the underground survivors.

Deal Benders: It takes about 10 chapters to really get into the story. I felt there could be less buildup to the main plot, or maybe a sideplot from another character's perspective. I was concerned for a bit, but after chapter 11 or so I was hooked on the story.

Overall Rating: 4 stars for an excellent last two thirds of the book.

For Fans Of: Anne Frank's Diary, Blast From the Past (movie with Brendan Fraser)
Posted by Hopefully at 12:24 PM