First Impression: Short stories and a lunar cover, let's take a ride down the rabbit hole... 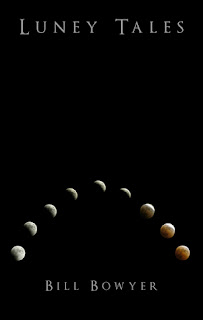 Characters: Each story centers around character interactions, except for the three at the end which are more of a futuristic documentary series. I was terrified of the children in "The Sandbox", as well as the boy from "The Ten Years". These stories will definitely unsettle how you look at someone crossing paths in the street.

Writing Style: Bowyer builds 'dark and twisty' in a way that makes you question where such thoughts originate. I get a similar feeling when reading Stephen King.

What I Enjoyed: Everything is believable yet out of this world. Short stories are easy to digest on the go, without forgetting what you read previously.

Deal Benders: The conclusions to the stories felt rushed, as if something more was supposed to happen. A couple were simply cliff hangers, which is acceptable, but others ended with pure confusion.

For Fans Of: The Twilight Zone
Posted by Hopefully at 12:33 PM