Quotable: "On the train, I watch strangers' eyes, studying the wrinkles that curl from them like script, like talons. How much squinting, how much laughter to earn each of those lines?" 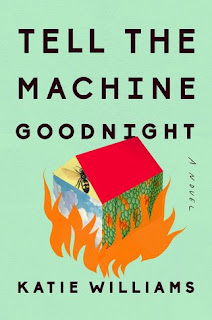 Character Development: Pearl and her son are the main focus of the story, dealing with themes of loss and mental illness. I think watching them grow was one of the best parts of this story.

World Building: A future where machines play psychologist and tell us how to find personal happiness is an appropriately disturbing yet wistful notion giving the rise of technology. What an intriguing concept - what if there was an algorithm for happiness?

Writing Style: I adore Williams' carefully crafted prose! The way she tells the story alone makes this a good read. I highly recommend it for those who enjoy the tickle of clever words.

What I Enjoyed: The writing again is remarkable, and I cared about the characters.

Deal Benders: The ending felt like there was nothing left to say, but not exactly finished. I would have liked some resolution to the happiness machine thread rather than just following Pearl and her son for a short while.

Overall Rating: 4 stars because even with the unsatisfying ending, the writing in this book made me really like it.
Posted by Hopefully at 7:25 AM